The Best M4A4 Skins in CSGO 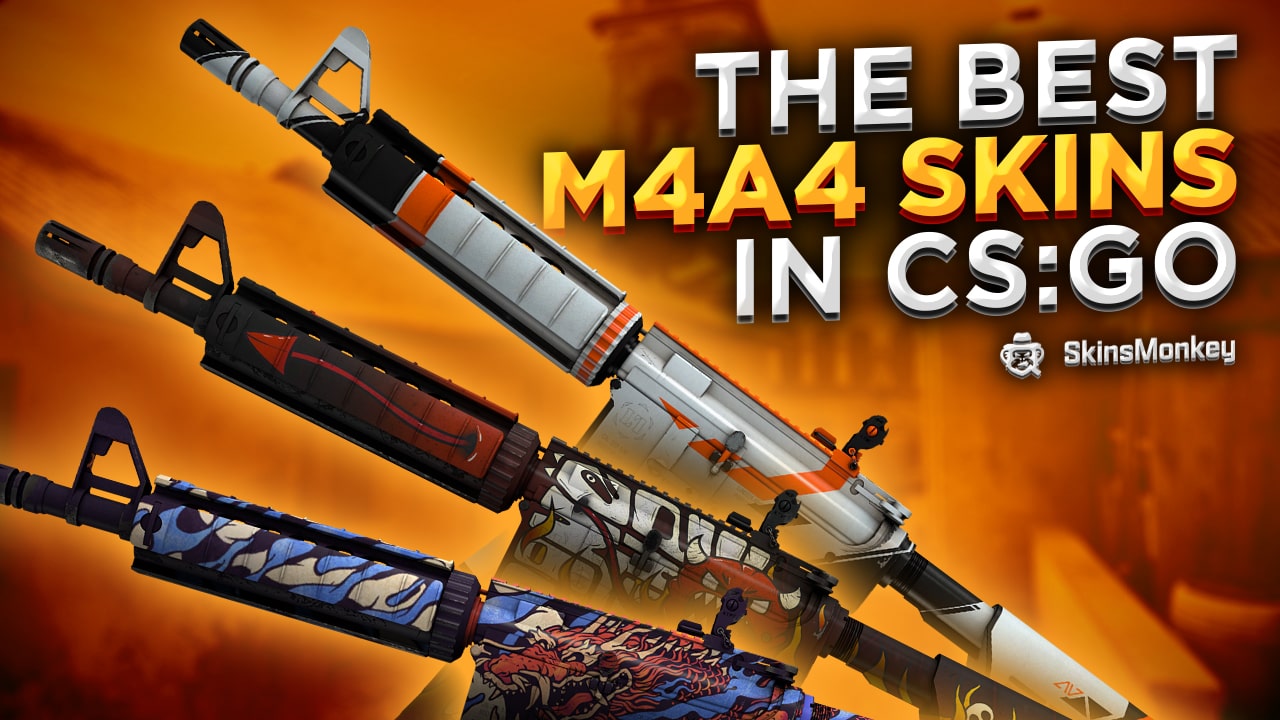 The M4A4 is one of the most popular weapons in CS:GO and due to that, the skins for it come in all shapes, sizes, and colors, and there is truly something for everyone. As it is the case with all weapons, some of the M4A4 skins are rarer, and therefore more expensive than others, so in order to save you the trouble of digging through piles of M4A4 skins, we have compiled a list of what we think are some of the best of them.

The M4A4 Howl is a contraband rifle that was added to the game in May 2014 during the Hunt Begins update and is no longer obtainable in the game by regular means such as dropping from a case or as a random drop. This is due to an incident regarding a dispute over the intellectual property of the design. This caused Valve to completely remove the skin from the game and label it as “contraband”. Nevertheless, the M4A4 skins that entered circulation prior to the incident were left in the game, and due to the Howl being unobtainable, the value of the skin has skyrocketed. Unfortunately, the precise value is unknown as the Howl skins never reach the open market, however, Steam estimates the value to be over $2000.

The M4A4 Neo Noir is a covert rifle that was added to the game back in February 2018 during the Welcome to the Clutch update and is a prominent member of the Clutch Collection. The Neo Noir M4A4 design features a blue-magenta woman painted over a grayscale background and players who wish to obtain it can do so by opening the Clutch Case. The Neo Noir skin for the M4A4 is available in all five exteriors as well as their StatTrak variants and its value can fluctuate between $3 and $100 depending on the exterior.

See also  Why Is M4A4 Howl So Expensive?

Flavor Text: For those who live fast

The M4A4 Magnesium is a mil-spec rifle that was added to CS:GO during the Welcome to the Danger Zone update in December 2018. According to the description, the skin was hand-painted with flames and a winged diffuser in white atop a dark gray house and is available in all five exteriors as well as their respective StatTrak variants. The M4A4 Magnesium is one of the cheaper skins on the market and can usually cost between a few cents and a couple of dollars.

Flavor Text: Lead with your head, even if it means ignoring your heart

About M4A4 The Emperor:

The M4A4 The Emperor is a covert rifle that was introduced to the game during the Seeing the Light update in March 2019 and is a part of the Prisma Collection. The design of the skin was inspired by the Emperor tarot card and can be obtained by opening the Prisma case. The M4A4 The Emperor skin comes in all five exteriors and each of them can have StatTrak attached to it. In terms of value, the Emperor M4A4 skin can cost anywhere between $5 and over $300.

Flavor Text: A weapon worthy of The Monkey King himself – Booth, Arms Dealer

The M4A4 Dragon King skin is a classified rifle that was put into the game in January 2015 during the Full Spectrum update and is a member of the Chroma collection. According to the official description, the skin has been painted to depict a red and blue dragon on the side and can be obtained by opening the Chroma case. The M4A4 Dragon King can be obtained in all five exteriors as well as their StatTrak versions and usually costs anywhere between $4 and $50.

Flavor Text: Three can keep a secret if two of them are dead

Drops From Case:  The Gods and Monsters Collection

The M4A4 Poseidon is a classified rifle that was added to the game in May 2015 during the Operation Bloodhound update and features a unique design that depicts an epic battle between Pisces and Poseidon on both sides of the weapon. The M4A4 Poseidon is available in only three exteriors, excluding the well-worn and battle-scarred versions, and can’t have the StatTrak technology attached to it. When it comes to value, the Poseidon is considered to be one of the more expensive skin, usually selling upwards of $1000.

Looking for more CS:GO skins that have blue tones and are similar to Poseidon? Be sure to check out The 10 Best Blue Skins in CS:GO!

See also  Smurfing in CS:GO - What Is It and Is It Legal?

Flavor Text: Anyone can predict the future… a visionary shapes it

The M4A4 Asiimov is covert rifle skin and a prominent member of the Winter Offensive Collection that was added to the game way back in 2013 during the Winter Offensive update. Just like all members of the Asiimov family, the M4A4 has been painted with a Sci-fi design and is obtainable by opening the Winter Offensive Weapon Case. The M4A4 is available in only three exteriors excluding the Factory New and Minimal Wear as well as their StatTrak variants, however, the exteriors that are available can have StatTrak attached to them. In terms of value, the M4A4 Asiimov can be worth anywhere between $30 and $400 depending on the exterior and the version of the skin.

Flavor Text: There’s one at every party

The M4A4 Buzz Kill is a covert rifle that was added to the game way back in 2016 during the Brothers In Arms update and can be acquired by opening the Glove case with an appropriate key. The Buzz Kill skin is a member of the Glove collection and has been painted in yellow and green according to the official description of the skin. The M4A4 Buzz Kill is available in all five exteriors and StatTrak technology can be attached to each of them. If you are looking to buy this skin, you will likely have to spend anywhere between $4 and $50 depending on the exterior.

Where to Buy or Trade CSGO M4A4 Skins?

You can buy or trade CS:GO M4A4 skins at the best prices using the trade bot SkinsMonkey, who have a huge amount of skins for this weapon on their bots. Use our site if you want to trade items from CS:GO, Rust and Dota 2 for new M4A4 skins in seconds.