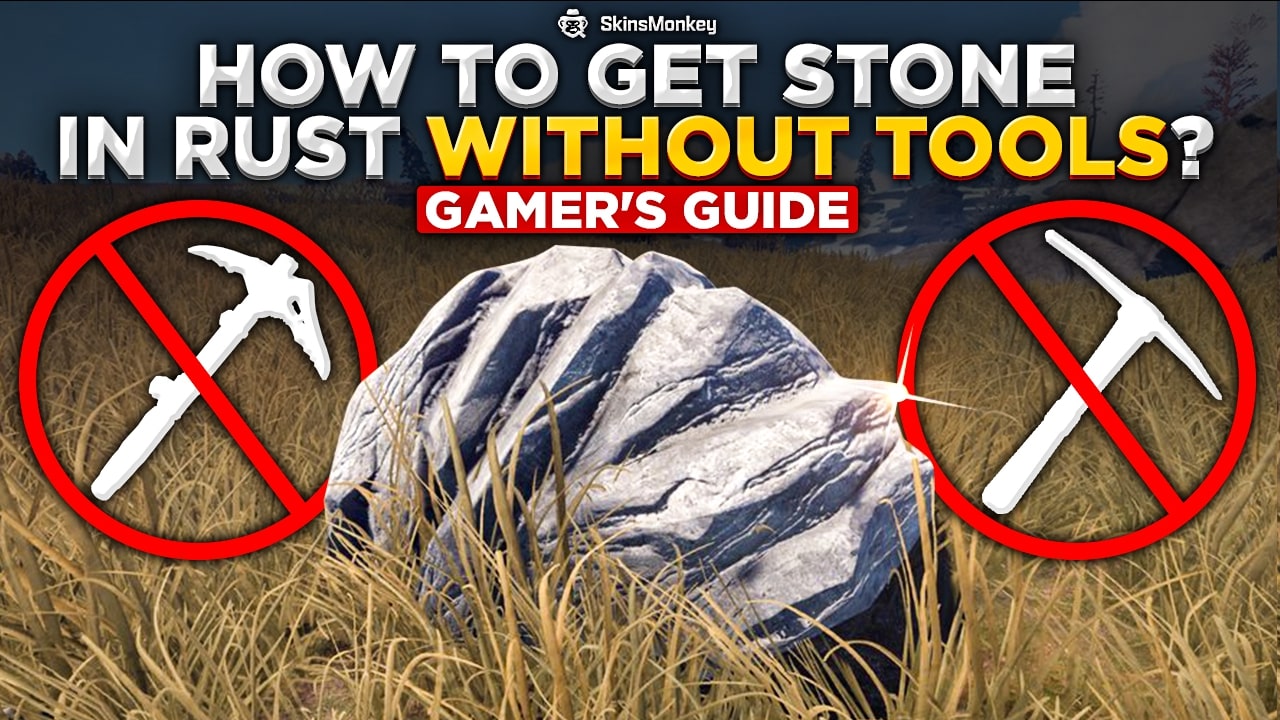 Stone is one of the most valuable materials in Rust, especially in the early stages of the game. It’s exceptional for building durable structures, crafting powerful tools, and much more. With this in mind, you can see how to get stone in Rust.

The most cost-efficient way how to get stone in Rust is with tools such as a metal pickaxe. However, you won’t always have your tools with you. But fear not, as there are ways to get stone without special stone tools.

When you finish reading this tutorial you will know how to get Rust rocks. Thus, it is the highest time to get the best Rust rock skins.

What is Stone Used for in Rust?

Stone has a lot of practical uses in Rust. How to get stone should definitely be one of the first things you learn when you first start playing the game. With enough stone, you can eventually build an unbreakable fortress. It is almost immune to solo raids.

The in-game uses for stone in this game are:

For example, once you build a wooden wall base, you can mine stone nodes and instantly upgrade your home with stone walls. It will make it significantly harder for new players to raid your base.

You can also use the stone to build external walls and prevent other players from getting close to your base. Lastly, you can craft tools like stone pickaxes that will positively change how quickly you mine other materials, including stone.

If you want to make tea, low-grade fuel, gunpowder, and explosives, you can prepare the ingredients on the mixing table Rust!

All Ways to Get Stone in Rust?

You might be asking yourself where to find a stone on a Rust map, or looking for special locations, but the truth is that stone is all around you. However, how efficiently you gather it depends on the techniques you decide to use.

The main ways for gathering stone in Rust, without tools, are the following:

Loose stones are small pieces of stone that you can instantly grab. You don’t need any special tools or extra time to collect these types of stones in Rust. When you come close to such a stone, it will be highlighted with a cursor.

The next thing you can do is use the stone you get from the game and hit bigger rocks to break them down and collect them. Once you get close to a stone ore node that is mineable, small light dots will appear, showing you where to hit the rock.

3. Recycle stone from other items

If you’re lucky enough to find items with stone in them like a stone pickaxe or similar, you can go to a gas station and use the recycler to break down the item and grab the stone.

This may not be as easy, but mining quarry is one of the most efficient ways to get more stone rocks in your inventory. Once you unlock this in Rust, you can build mining quarries that will constantly collect stone from the rocky areas for you.

Can You Buy Stone in Rust?

Yes, you can purchase stone in Rust from the Outpost vending machine. If finding a stone is a priority for you and you don’t have time to mine it, this is one of the fastest ways to get it.

Although, this method is probably not very realistic in the early game, as you won’t have anything to pay for the stone. However, it’s an excellent method for later in the game when you have other resources but don’t have the time to go out there and start hitting rocks.

Where to Find Stone in Rust?

Even though stone ore nodes can spawn all across the Rust map, certain places such as mountainous areas, beach boulders, or gigantic stone ledges are the best places to look.

Just as metal ore nodes spawn more in specific areas, the same applied to all other nodes in Rust. Ideally, you will always want to look for rocky ground areas. It’s where you will have the easiest time collecting stones. It is also where you’ll want to build your mining quarry.

Additionally, if you’re curious about how to get stone in Rust console, you’ll be glad to know that all of the laws and rules we described here are the same for both console and PC. So, there’s no need to take any extra precautions or measures.

Useful Also: How To Get Food In Rust?

Whether your goal is to craft a stone spear or build a giant concrete barricade, the stone will always be a crucially important item in Rust.

Ideally, the best and most efficient way how to get stone on Rust is with a metal pickaxe or, even better, a jackhammer. However, you won’t always have one. That’s why we created this guide, so you can still be efficient in gathering stones even without the right tools for the job.