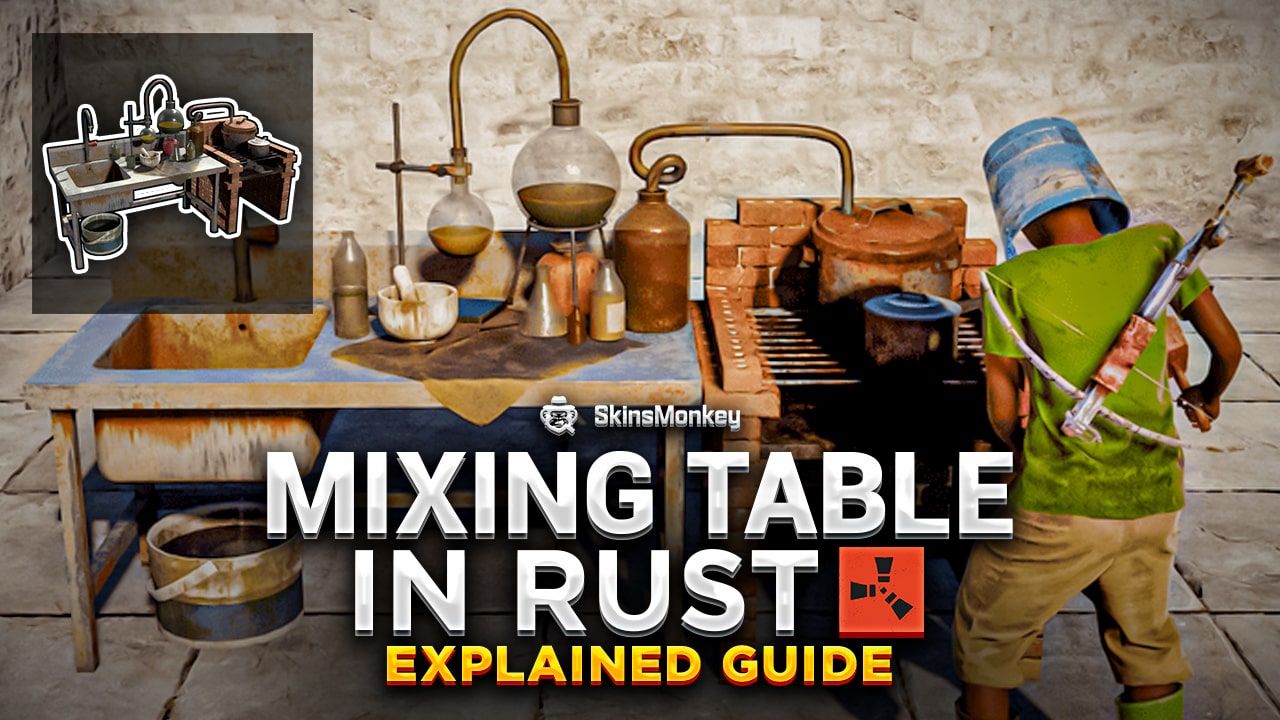 The mixing desk appeared in Rust with the August 6, 2020 upgrade. And it includes tea and strawberries, as well as a mixing table Rust. The mixing table aims to make new products by processing ingredients according to mixing recipes.

If you want to make tea, low-grade fuel, gunpowder, and Rust explosives, you can prepare the ingredients on the mixing table Rust! It is not so difficult to prepare the teas. Just memorize the recipe and enjoy their unique benefits.

How Do You Craft A Mixing Table Rust and How Do You Use It?

The Rust mixing table can be purchased for 175 Scraps at the Bandit Camp monument’s Food Shop. After purchasing, it can be researched for 75 Scraps. You’ll need 200 metal components and 100 stones to craft in a level 1 Workbench.

The recipes you learn will be written on the mixing table‘s production screen. The plan will not appear in the recipe list unless you memorize the crafting.

The ‘start mixing’ button will turn green only when you’ve found the proper recipe. This table starts with 500 health. If you wish, you can repair it with stone and metal parts when its health is reduced. Thanks to the new Rust mixing table, you will prepare teas by mixing the berries according to the recipe. Let’s take a closer look at berries and teas.

What are Berries Used For, and Where Can You Find Them?

You can find blackberries in woods and meadows where also potatoes and mushrooms grow. The bright colors of the fruits make it easy to identify them, but there is no specific information regarding which fruit is located where. These fruits can be found at various locations across the map. You can also use the seeds you obtain from picking bushes to produce and clone berries.

There are five varieties of berries in Rust to choose from. These are:

Eating berries can add you to +5 energy and +2 hydration. If you want a more dramatic look, this table is a fantastic choice. Magical teas can be made by combining fruits according to recipes. So, how much do we know about teas and their preparation methods?

What are Teas and How Do They Work?

Before we go into the many sorts of tea, let’s have a closer look at the different levels of tea. Teas are divided into three layers:

The basic tier is at the bottom, (base mi basic mi?) while the pure layer is at the top. The effects of the tea become greater as you progress from the basic layer to the pure layer. To make strong tea, combine four low-level teas at the mixing table Rust.

There are a total of six different types of tea. Each tea has its own distinct effects, and each tea can be made using a variety of recipes. Remeber, it is critical to follow the recipe completely when making tea. You must pay close attention to specifics such as the fruit’s lineup and color. It’s impossible to prepare tea the wrong way around or with the wrong fruits. The ‘start mixing’ button, on the other hand, will become green if you follow the correct order.

Furthermore, the blackberries you add to the incorrect combinations will not vanish; instead, they will prohibit you from making tea. Another thing to keep in mind is that while different types of tea can be stacked, different layers of the same tea cannot.

For example, you have a basic tier and pure tier tea of ​​maximum health tea. You can only see the effect of the highest grade pure layer tea. Besides Max Health Tea, you can also save from other types of tea. All teas provide +30 hydration, although the effects vary according to the original properties of the teas.

Types of Tea and Mixing Recipes

You’ll get teas with distinctive effects if you utilize blackberries in the appropriate sequence and color on the mixing table. Bear in mind that you need to strictly follow the the recipe. Let’s look at the qualities and recipes of these teas with various benefits.

RELATED:  Everything You Wanted To Know About Blood Rust But Were Afraid To Ask

Max Health Tea helps to maximize your health. It’s made by combining three red berries with one yellow berries.

Depending on the level of the tea, Healing Tea ensures that health is regained over time. To achieve such an effect you need to combine four red blackberries.

Ore Tea works by increasing the amount of ore you receive. Obtained by a combination of yellow, blue, yellow, blueberries.

Wood Tea increases your wood yield by increasing the amount of wood you take. To prepare it just memorize the following combination: red, blue, red, blueberries.

Scrap Tea increases the amount of scrap you receive. To cook it you need to combine yellow, white, yellow, white berries.

How Can We Craft Other Items on the Mixing Table Rust?

Making magical teas may appear to be the ideal use for a mixing table Rust. As an alternative, you can use the mixing table to make explosives, low-grade fuel, and gunpowder, among other things. These items are possible to obtain with the appropriate strategy. Let’s have a closer look at these things’ descriptions.

If you want to create an item with 1 explosives yield, you need to mix the materials below;

To get 4 low-grade fuels, you need 1 cloth and 3 animal fats. If you want to create a gunpowder, you need to combine 10 sulfur, 10 coal, 10 sulfur, 10 coal. Bear in mind to process the recipes correctly. Thank to it you can fully benefit from your products.

Thus, the mixing table in Rust can be used to obtain magical teas and other components. Have you thought about what you could do with it? Frist, it aides your research efforts. And second, it improves your game efficiency. Now you know how to do mixing table, fruits, and teas. If you think you’ve grasped the concept, how about looking for red berries to make Healing Tea?