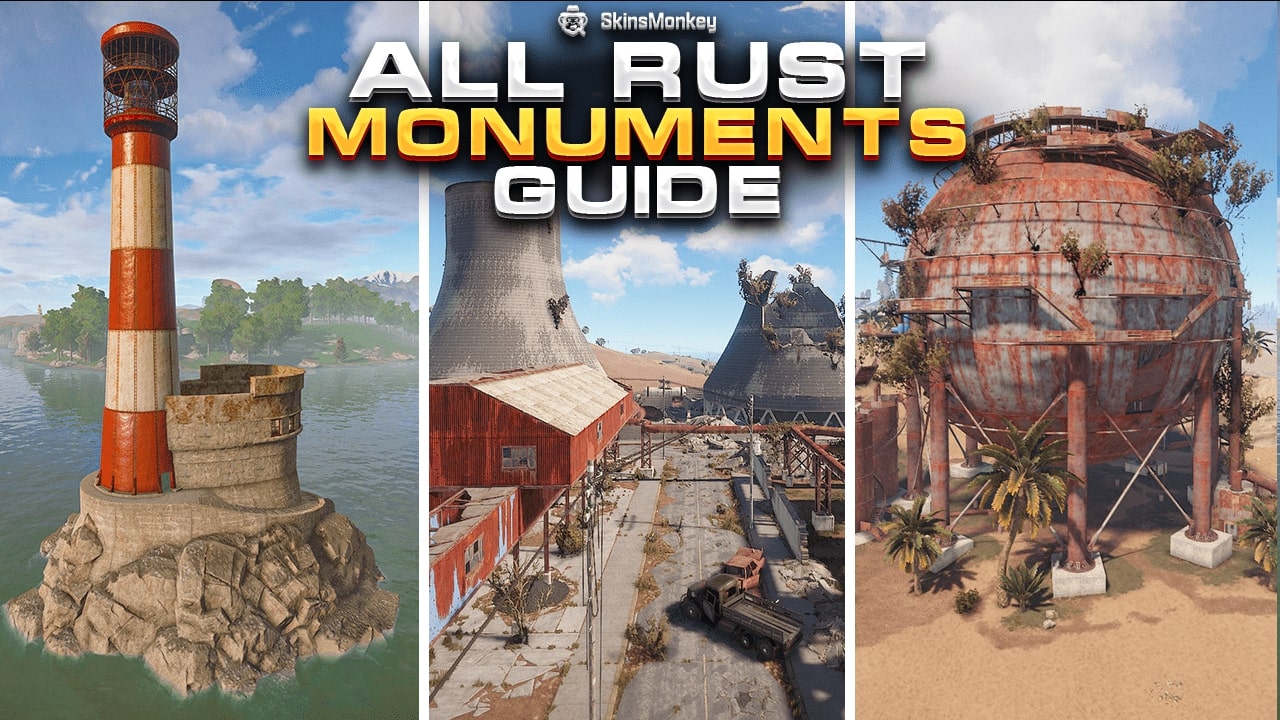 Abandoned post-apocalyptic sites are some of the most important places you’ll encounter in Rust. As you wander through the world of in-game.

This so-called the Rust Monuments are what remains of an ancient civilization. It has valuable loot resources for players. Rust Monument in-game types are also referred to as Rad Towns, landmarks, or dungeons.

In other words, the Rust Monuments are crucial to the game’s progression. It allows you more loot. That’s why we’ve prepared an advanced Rust Monuments guide. Thanks to it you can easily find everything you need to know about the most important monuments in Rust.

Tips For Monuments: Where To Start?

You can easily spot all Rust Monuments on your Map. Rust all Monuments’ land is brown, and you can see their name written in black letters on it.

There are two types of monuments in the game. Smaller Monuments include:

Therefore, looting them is not as rewarding as looting a large Monument. On the other hand, it could be safer and faster.

Unfortunately, most big Monuments are also Rad Town. It means that they teleported. You can’t see when an area teleports by looking at your game map. It is also one of the most dangerous monuments in the game. Because they contain radiation. Other players while going there, wear hazmat suits for rust radiation protection for monuments.

The most significant and most rewarding Monuments Rust are:

If you see any of these Monuments on your game Map, you should visit them as they are full of loot chests.

It’s essential to know the custom Rust monuments. These monuments have juicy loot like elite crates and military crates. Moreover, along with the loot, there are also helpful items such as repair bench, oil refinery etc.

Below is the list with the TOP 5 most popular monuments in Rust:

The Airfield is one of the game’s most famous monuments. It is considered comprehensive and spread over a flat area. The Airfield has watchtowers, two runways, an office building, and three hangars.

So, why is the Airfield one of the best monuments in Rust?

The Dome is an excellent monument to all players who have overcome difficulties. No matter how hard it is to get to the top, you will encounter good loot when you climb. It is difficult to get to the top of the Dome. Because you are more likely to die by falling.

So, why is the Dome one of the best?

As the name suggests, you need to be careful in the Power Plant area, which has many radioactive regions. If you don’t have a hazmat suit for radiation protection, you don’t need to visit here.

Note: If you want less radiation, The Train Yard is a safer zone than the other monument.

So, why is the Power Plant one of the best?

Military tunnels are one of the famous monuments in Rust. They provide the high loot. But as much as it is rewarding, it also has its dangers.

Why are the Military Tunnels one of the best?

The Launch Area is one of the areas with the most loot access building in Rust. Here the PVP battles take place quite frequently. What is more, it is the most specific zone where players ambush each other and loot. If you hide in a good ambush, you can surprise even the best Rust player and take their loot.

The Launch Site is built on a reasonably large area. This feature makes it a trendy place. Also, an NPC patrol helicopter is constantly coming to the site to refuel. If you disable the helicopter, you will get high-quality metal and lots of loot!

In addition, The “main building” in this monument is the factory; for the more military crate, elite crates, and others.

So, why is the Launch Site one of the best in Rust?

We have recommended 5 of the best to you, but 10 more areas are at least as good as them. But these monuments can be risky as they are smaller:

We added the puzzle as a bonus. Why? Because it is another way to gather loot from monuments! It offers you loot by having fun and researching. Puzzles give loot easy access and less risk of enemy players; kinda safe zone.

Let’s take a closer look at the puzzles to enable you to do these things. There are three types of doors. The color levels of these doors are; green, blue, and red. While solving the puzzle, your goal is to open these doors and reach the loot in the rooms. In order to access the loot, you have to open the locked door with the card of the desired color. In addition, you need to power the door with electricity.

Once you reach the green door, you’ll find loot and a blue keycard in the loot room. Blue keycards solve the blue puzzle: will allow you to enter middle-tier blue doors. Middle-tier doors offer more loot than green doors. Where is the Rust blue card monuments’ location?

Where Is The Rust Blue Card Monuments’ Location?

As you guessed, the blue doors will also access you to the red keycards. After collecting the loot there, go to the red doors. These doors are more complex than others but give more generous loot.

In addition, green, blue, and red keycards are also required to open the Locked Crate. Locked Crate is one of the rarest crates in the game. You can get these crates by dropping the Chinook helicopters at random monuments or by accessing the Cargo Ship. It can also be found on Oil rigs such as Cargo Ships.