How To Get Food In Rust? – All Scenarios Explained 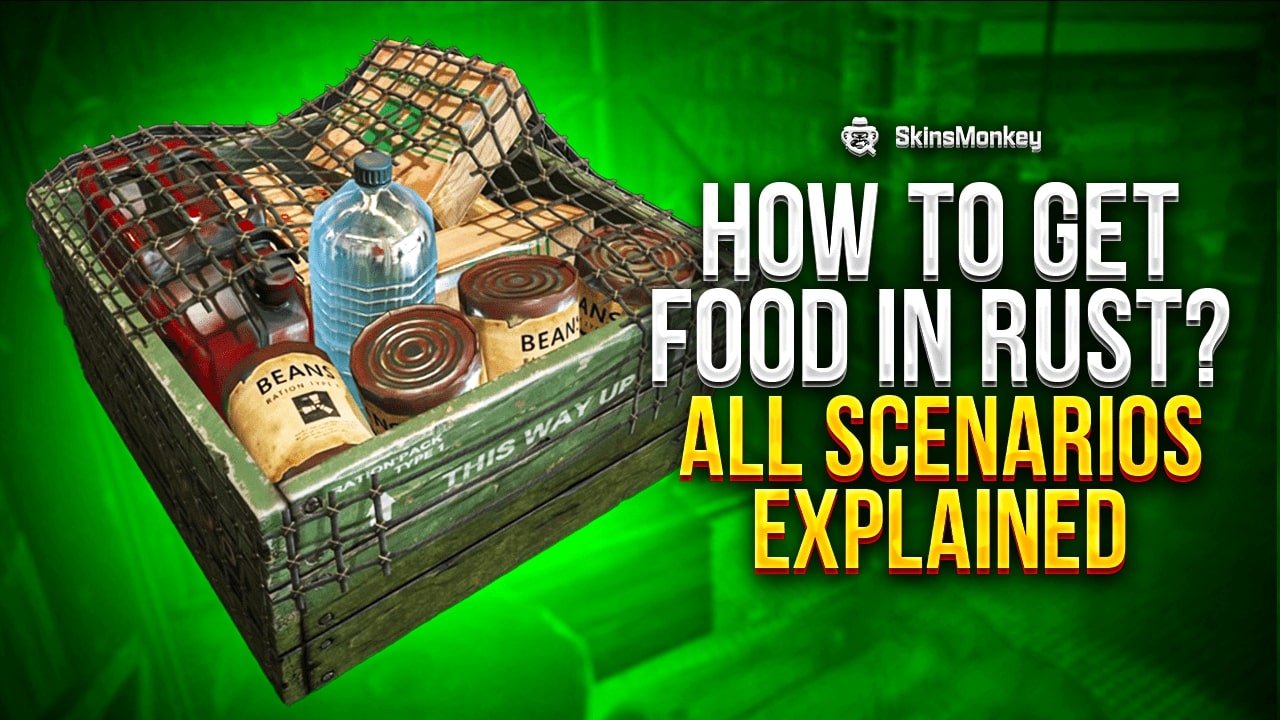 Starving to death is one of the slowest and most painful deaths that you can experience in RUST. As a result, we’re going to teach you all the different ways on how to get food in RUST.

Rust foods that are easier to obtain offer fewer calories and nutrients. On the other hand, foods that are harder to obtain can reward you with more health and a few other bonuses as well. This doesn’t always have to be the case but it’s a common rule.

Thanks to this gamer’s guide you will quickly find out that there are many different types of foods you can enjoy. Let’s start the adventure!

Why Do You Need Searching for Food in Rust?

In Rust, finding food is a high priority. Even though this isn’t a new mechanic in the gaming world, Rust takes it to a whole other level and makes it quite hard on beginners who are new to survival games.

When you first start the game, you have nothing except a heavy rock, a torch, and some bandages. Oh yes, you’re also starving and close to dehydration. So, you quickly have found the answer to the question – how to get food in Rust. Of course, before it’s too late.

If you’re lucky enough, you can find barrels laying around your spawn area. Most of the time, there will be a few ration boxes near these barrels. This won’t offer as much as food crates, for example, but it will be enough for the early game.

Different Types of Foods in Rust

In front of you, you’ll find a list of every available type of food in RUST. After you’ve scanned through the list, scroll down to discover how to get your hands on each of these food items in the game.

Regarding all the different types of meat, you get raw meat when you first kill animals in Rust. Then, you can cook food to get cooked meat by placing it over a campfire. Also, you can get burnt meat by forgetting it on the fire for too long or when you find food crates and barrels as well.

8 Ways How to Get Food in Rust

You’d be smart to memorize the following ways regarding how to get food in Rust. By doing so, you’ll never miss a great source of food once you stumble upon one. Trust me, your health bar will thank you.

1. Piles Near Roads and Monuments

A super-easy way to get food in Rust is finding ration boxes or food crates near barrels or garbage containers alongside roads. These ration boxes are a good source of low-grade fuel that will keep you going further.

What you can expect to find inside is usually some granola bars, water, a tuna can, anti-radiation pills, and even metal fragments as well.

💡 Tip: Make sure you keep the empty tin if you get something like a can of beans. It will come in handy for getting more metal fragments later on.

2. Walk Along the Streams or Rivers

The second best and easiest way towards finding food in Rust (mainly vegetables and plants) at the start is by going near a river. This is the easiest way to find a steady supply of food in the game.

💡 Tip: Press “G” on your keyboard to open the map. Then, look for a long blue line like this. 👇

Once you are near the stream, chances are very high that you’ll see some corn, pumpkins, clean water, and even some berries.

📝Cool Fact: Did you know that you can wear pumpkins on your head in Rust? Pop one over your head and go scare some other players.

When learning how to get food in Rust, the best option will always be hunting animals. It tops all the other methods of finding food such as food crates or ration boxes for one main reason.

Killing animals in Rust will grant you delicious meat, animal fat, bones, leather, and cloth. All of these items can find incredible use later in the game.

In the early game, all you can kill with your Rock are smaller animals like a chicken and anything as big as a boar. In addition, you’ll need to craft a bone knife to be able to skin the bigger animals later on.

Animals like the Bears in Rust are extremely deadly. They’re fast, deal a lot of damage, and take a lot of work to kill. However, it’s almost always worth killing an animal considering you don’t get killed yourself in the process.

If you want to avoid starvation, going on a scavenger hunt for gas stations and supermarkets near you is a great way to get food in Rust and offer health regeneration quickly.

So, what can you expect to find at gas stations or supermarkets? Mainly, you’ll see food crates filled with food like chocolate bars, water, a can of beans, and similar.

5. Look for Mushrooms in Forests

Mushrooms in Rust do not regenerate a whole lot of health bars. But this doesn’t mean you should avoid them. It’s not worth going out of your way to look for mushrooms specifically. On the ipther hand, it’s great to know that you can find them in a forest if you happen to be going through one.

If you happen to be in a forest in Rust, just look down and look for mushrooms mainly near trees. You can instantly consume them and get a slight boost to keep you moving for a while longer.

6. Eat Other Humans in Rust

This may not sound pretty, but you can eat human meat from the opponents. In case you get really desperate inside the game. However, there is a risk that comes with this type of food in Rust. It will cause very noticeable dehydration.

With this in mind, make sure you have a lot of water to drink after eating other humans in Rust. At the end of the day, anything goes in this game if you want to survive.

Another easy form of getting food in Rust is to plant the seeds that you’ve received from eating other plants.

In order to do this, you can plant the seeds in any area where there’s soil. However, you will get much better and faster results by planting your seeds in a spot where there’s more sun, warmth, and water.

The most efficient way to catch fish in Rust is to craft fish traps and lay them in the water. In order to start building a fish trap, you will need 200 wood and 5 cloth. It takes 30 seconds for the trap to be built.

After it’s ready, you will need to find a good place to put it. Not all areas in the water will yield the same results. You’re also going to need to place at least 100 calories worth of bait inside the trap to catch fish.

💡Tip: Cooking the fish that you catch will give you more calories and healing compared to eating it raw.

These are the main methods to get food in Rust. Hopefully, this Rust guide cleared up how to go about each method and quickly get your hands on as many calories as you can to regenerate health and live another day.