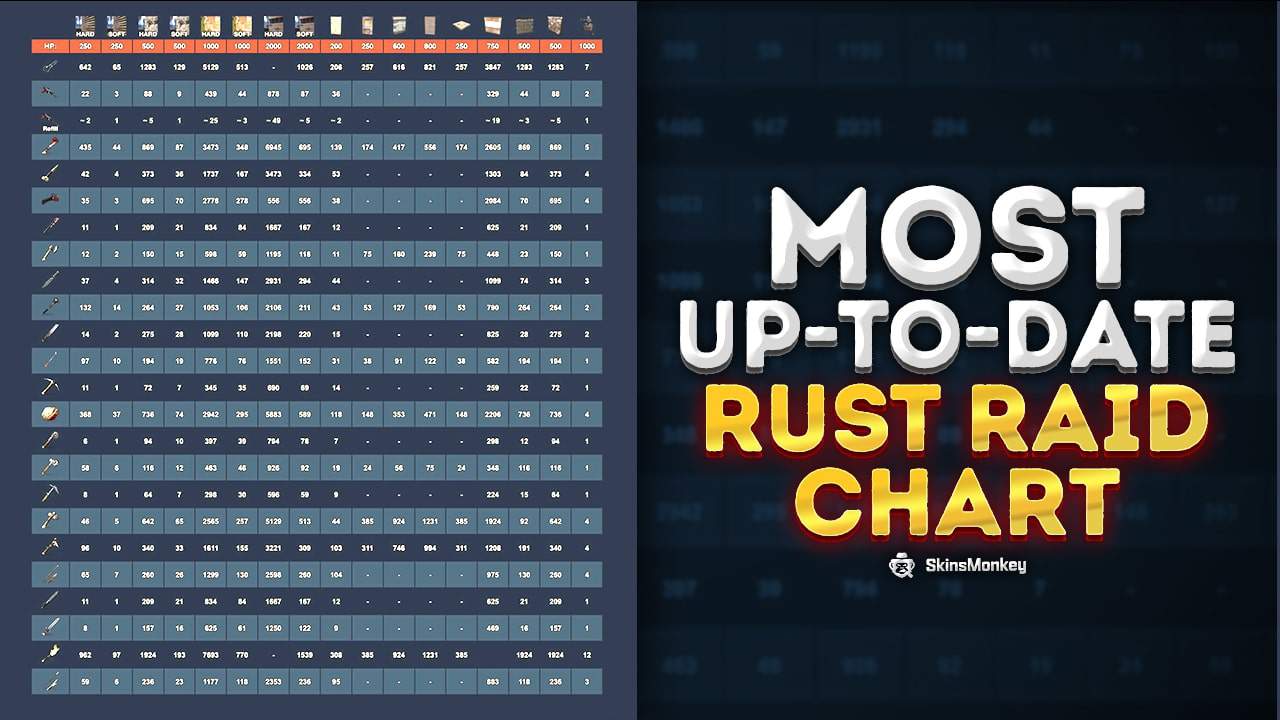 Raiding in Rust can be a painstaking process or an extremely straightforward operation. Which of these ways it goes for you depends on whether or not you use an up-to-date Rust raid chart. If you use a Rust raid chart, you can avoid wasting time, resources, and embarrassment in front of other players.

With this in mind, let’s dive into this simple Rust raid guide designed to help improve the efficiency of your raids. You’ll learn the most cost-efficient ways to take down sheet metal doors, and armored doors, and calculate raid costs for any other type of building material.

Why Is the Rust Raid Chart Crucial for Evolving in Rust?

In a game like Rust, where resources are scarce, finding the most cost-efficient way to do anything is crucial. Otherwise, you will quickly die.

Because of this, a raid chart in Rust will show you the right amount of resources, tools, and weapons you need to break down your enemies’ bases.

The main point is that an up-to-date Rust raid chart 2022 will show you the exact items and costs required to raid anything. As a result, you can progress much faster, take down more bases effectively, and grow more rapidly. It is what all of our Rust guides are.

Here are the most important Rust raid charts you need to keep by your side:

This chart represents how many units of each explosive are required to take down every listed building material and object.

RELATED:  All You Need To Know About Rust Stone Wall

You might be wondering, why you do not notice the Rust F1 Grenade on this list. It is because using this grenade for raids is rarely worth it. You need at least 50 F1 Grenades to destroy a single Wooden Wall.

Additionally, you will need hundreds, even thousands of F1 Grenades to destroy the stronger walls in Rust. It’s simply not worth it.

This raid chart represents how frequently you should hit these building materials with all listed weapons to destroy them.

What is Rust Raid Calculator? Where to Find it?

A Rust raid calculator is a precise tool that tells you the exact amount of resources, tools, hits, explosives, and even ores you will need to raid a particular base. All you have to know is what you’re raiding.

Unlike Rust raid charts, a raid calculator in Rust lets you input the amount and types of walls the base you want to raid has. Moreover, it will give you information on all the resources you need to craft the raiding tools and weapons for that base.

It’s a helpful tool that displays the items, raid costs, and tools with great precision and efficiency. Best of all, it’s free.

How to Calculate Costs Using a Rust Raid Chart?

Calculating the cheapest building raid costs is pretty simple. You should have a few basic raid charts and the know-how to read them. Luckily, you’ll get all of this right here and now.

Let’s look at the basic structure of each Rust raid damage chart.

If you look closely, you will notice that the left side of the chart represents the raiding resource needed to destroy a particular building material. It can include Beancan Grenades, Satchel Charges, Axes, Pickaxes, and anything that can deal regular or splash damage to objects.

The top part of the chart represents the material that is being destroyed, such as Stone Walls, Sheet Metal Doors, and other construction items.

Sometimes, you may also come across a Rust raid cost chart. It also includes the soft side and the hard side walls. As you may know, the inner and outer side of Rust walls requires different amounts of damage. Some charts display this individually.

RELATED:  How to Buy Rust Skins?

Lastly, any numbers you see in the mid portion of the chart are how much of that raiding resource is needed to destroy the correlating object above.

Online raiding in Rust is the simple process of raiding someone’s base while they are still online and actively defending it.

It may be so, but many online players also do something that can easily trigger a raider. It is known as despawning loot.

It simply means that the online player defending against a raid drops their gear on the ground. So it despawns. As a result, the raider wastes all the time and effort to gain virtually nothing.

Bottom line. Do not worry about whether it’s an online or an offline raid. The main goal is to raid the bases for resources or territorial reasons and make sure to do an efficient job. Whether it’s an offline or an online raid, you should remember to make good use of this Rust raiding guide and the Rust raid charts displayed here.

The most important thing you can do from this point on is to save every Rust raid chart you see here and always return to it before a raid. Discover the cheapest way to raid a particular player’s base and waste no time after you’ve gathered what you need.

Remember, the raid chart in Rust and the Rust raid calculator are your best friends in Rust. In particular in the most crusial episodes of the gameplay.