Destroying Rust Tool Cupboard of Your Enemies: All Ways Explained 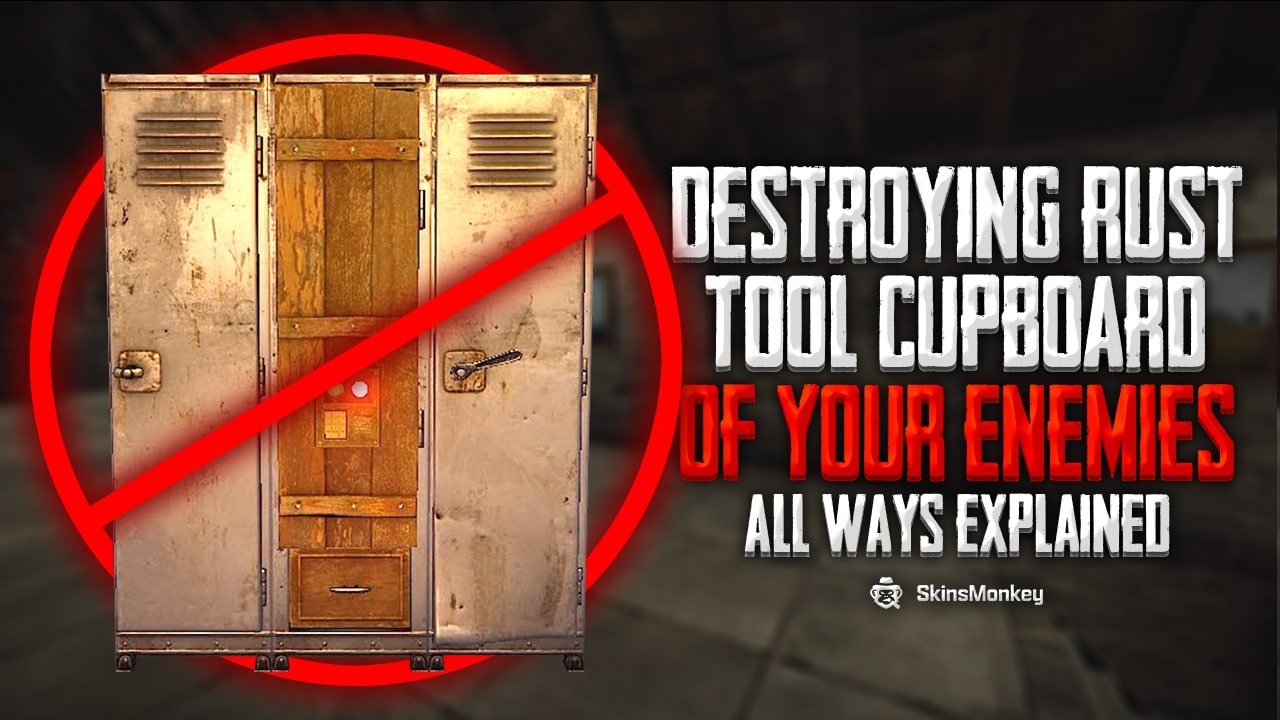 If you’re recently starting to play Rust, here is the best advice you can get as a beginner about the Rust Tool Cupboard. It is an essential item for controlling a player’s base.

Whoever has authority over the Rust Tool Cupboard in a particular base gets a building privilege, gets to upgrade the basement, and won’t be attacked by any flamethrowers, shotgun traps, and so on in a 25-meter radius.

It will be your ultimate guide on the Rust Tool Cupboard. You will learn how to craft, use it, and destroy it as quickly as possible and lock other players out of their bases in Rust.

What is Rust Tool Cupboard?

The Tool Cupboard in Rust is essential to all players. It controls who gets to build, upgrade, or affect a base in Rust. If you did not have authorization over a certain Rust Tool Cupboard, you would not be able to craft, upgrade, or destroy building blocks within a 25-meter TC radius from that base.

Only you can give authorization of your Tool Cupboards to other players. You can also remove those privileges or keep them locked and protected with a key lock. Moreover, you can program an authorization code preventing anyone from without the password for your TC.

Why Do You Need a Tool Cupboard in Rust?

The Rust Tool Cupboard serves three crucial functions for you as a Rust player:

With this in mind, if you want to beat another player in Rust, it’s crucial to locate and destroy their Tool Cupboard as fast as possible. Doing so will allow you to place your doors inside their base, disable all of their traps, and take the entire base as your own.

How to Destroy Tool Cupboard Rust of Your Enemy?

If you want to learn the best way to destroy a Tool Cupboard in Rust, you can find the five best methods for this below.

It only takes a single Satchel Charge to destroy the Tool Cupboard in Rust. It is no surprise, as Satchel Charges are some of the most effective weapons for demolishing various structures in Rust, such as Sheet Metal Doors, Walls, and more.

Here’s what you have to do:

Beancan Grenades aren’t as effective as the Satchel Charge in Rust but they are much more affordable. It only takes 60 Gun Powder and 20 Metal Fragments to unlock their Blueprint and craft one Beancan Grenade in Rust.

To destroy a Rust Tool Cupboard, you will need four Beancan Grenades. It adds up to first collecting 240 Gun Powder and 80 Metal Fragments. After that, you’ll be ready to take over a base and take away the owner’s building privilege.

To use Beancan Grenades effectively, you have to:

If you were lucky enough to be able to craft a gun in Rust or to stumble upon one randomly, then you should craft as many Explosive Rounds as you can. Not only are they fantastic for breaking a Tool Cupboard in Rust, but they are also quite effective for taking down doors.

RELATED:  What Are Rust Skins Drops and How Do They Work?

With Explosive Ammo, you should stand at a safe distance and start shooting at the TC with any gun that fires 5.56 rounds.

Fire Arrows are way less effective than the previous three methods we’ve covered. However, they are significantly cheaper to craft as well. It’s a great way to destroy the Tool Cupboard at an early stage of the game when you don’t have tons and tons of resources.

You will need 25 Fire Arrows to destroy a single TC inside any building in Rust.

To craft the Fire Arrows, you will need either a Hunting Bow, Compound Bow, or a Crossbow. The Hunting Bow is the easiest one to craft from these three.

To craft two of these rockets, you will need a Tier 2 Workbench, 2 Pipe, and 200 Gun Powder.

To use the High-Velocity Rocket:

NOTE: Some weapons in Rust, such as the Nailgun, Wooden Arrows, or similar, don’t provide any damage to the Tool Cupboard at all. With this in mind, it’s pointless to waste your time trying to figure out what deals the most damage to the TC in Rust.

In addition to everything we’ve explained about the TC in Rust, you can also use this item as a storage place. Ideally, you’ll want to store your tools, such as your Hammer and Building Plan inside the TC.

Lastly, it’s crucial to have your Tool Cupboard as protected as you possibly can. Create airlocks, throw down several doors in front of it, and hide it well. Remember, whoever has access to your TC controls your entire base.

Additionally, after the recent update, you are no longer allowed to practice Rust Tool Cupboard stacking. This means that all TCs in Rust must be at least 6 foundation blocks apart from each other.

RELATED:  The 8 Best MP5 Skins in Rust
Similar articles you may like