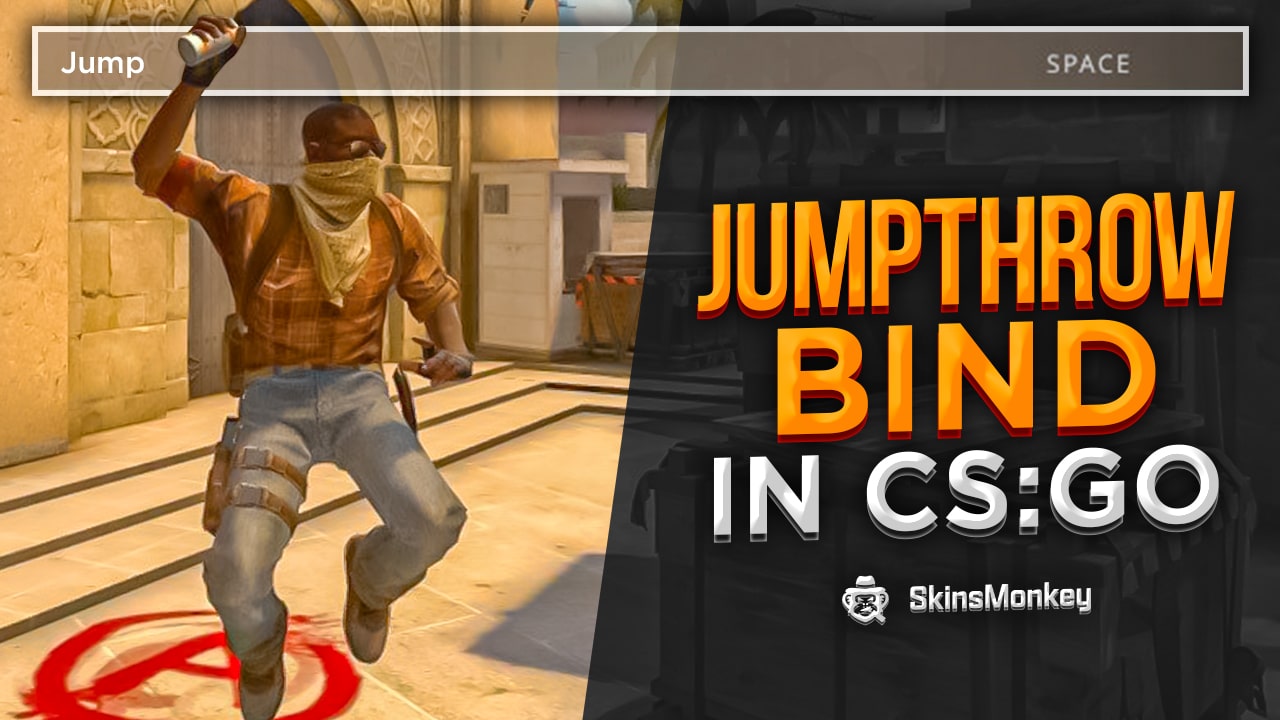 Why waste countless hours perfecting how to jump, perfectly aim, and throw a grenade in mid-air in CSGO when you can use a jump throw bind and never make a mistake? Yup, you can easily master this difficult execution by simply using a jumpthrow bind. Want to learn how? Keep reading and all will be made clear.

What Is JumpThrow in CSGO?

In Counter-Strike Global Offensive, you can throw a smoke grenade, Molotov, and all other nades much further away by mastering the jump throw. This is a technique where you basically load up the grenade, jump, and throw it by quickly aiming at your destination. However, it can be quite difficult to pull off because it has to be done before you land after you jump. And, the nade doesn’t exactly go where you throw it, because this technique is usually used to throw grenades over tall buildings or at extremely long distances. Basically, it’s really hard to pull it off 100% of the time. You’d be lucky if you get it half the time.

What Is a JumpThrow Bind?

A jump-throw bind in CSGO is what allows you to easily master the jump-throw technique. It’s basically a script, or tiny piece of code, that you bind to a keyboard or mouse button and it executes a jump-throw by itself. It works 100% of the time.

You don’t have to worry about getting the timing right, the jump, or the throw. All you have to do is aim and it does all the rest for you and ensures maximum efficiency and accuracy.

The jump-throw bind is extremely useful because we can’t always jump and let go of our left mouse button to throw the nade at the exact same time. It’s super easy to make a mistake and waste your grenade. As a result, you use your favorite bind-key, bind it, and let the press of a single button do all the work for you. Best of all, it will work 100% of the time.

Is JumpThrow Bind Legal In CS:GO?

Generally, using the jump throw bind to throw grenades in CS GO is legal and won’t get you banned from servers. However, that’s not the case all of the time. It usually depends and you always have to check the rules on each server or tournament that you play.

Using a jumpthrow bind on MM, FACEIT, and ESEA is legal. You can freely take advantage of this simple command and improve your gameplay in standard matchmaking in CSGO.

However, when it comes to pro or semi-pro tournaments it’s quite common for the simple bind for jump-throw not to be allowed. It usually depends on the tournament rules but mostly it won’t be allowed. So, make sure that you check the rules before you use them and get yourself banned.

How to Add the JumpThrow Bind?

Setting up bind commands in CSGO is super easy. But first, you have to enable the developer console in the settings. You can do this by going to your in-game CSGO settings > Game > Enable Developer Console > Yes.

After this, open the console by clicking on the tilde (`) key on your keyboard and enter this command:

The “X” is where you have to type in the button that you want to bind this command to. So now, for example, if you set your bind to the letter “T”, your jumpthrow bind will activate every time you use a grenade and press on “T”.

There’s just one tiny problem with this method. The command won’t register the next time you open up CSGO. It won’t remember it and you’ll have to type it in again, and again. In order to avoid this, you have to save it in your Autoexec file. Don’t worry, here’s how to do that as well.

If you already have an Autoexec file set up, then simply find it in your CSGO file directory, open it, paste this command, and click on “Save”.

This will set your jumpthrow to your “X” button on the keyboard. Remember to change it to whatever key feels most convenient for you.

If you don’t already have an Autoexec file set up, then follow these steps:

How to Use the Jump-Throw Bind?

Now, it all comes down to learning how to use the jumpthrow bind. All you have to do is simply go to the position from where you want to throw the nade, left-click on the grenade, and press on the jumpthrow bind button that you chose. Now, you don’t have to jump and let go of the mouse buttons. The entire process will execute by itself as soon as you click on your jumpthrow bind key.