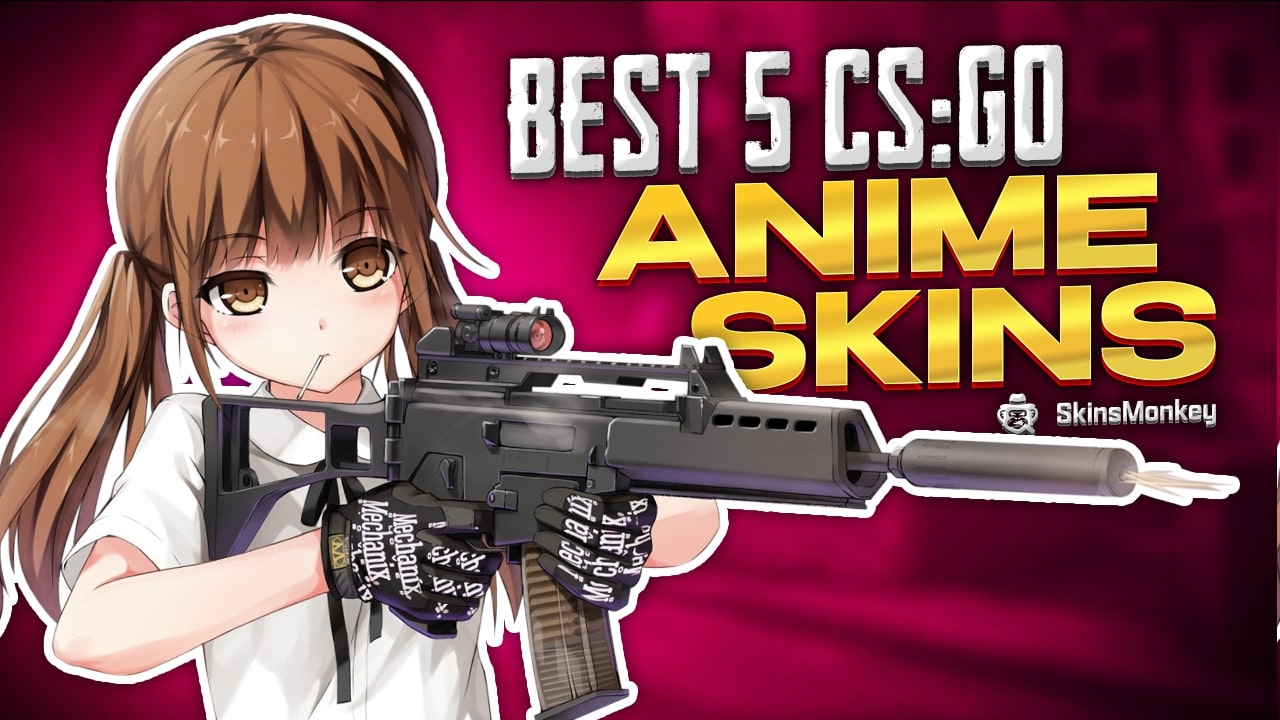 Skins and cosmetic items have always been a part of the CSGO experience. They allowe CS GO players to express their creativity through customization of the appearance of their knives, CS:GO gloves, guns and even characters.

With every CSGO update new skins appeared in the in-game items economy. And over time, CSGO accumulated a large selection of cosmetic items that center around a specific topic or design, such as futuristic skins, military skins, and even CSGO anime skins.

There are many CSGO skins in the game that an anime fan would love to add to their inventory. While we can’t cover all of them, we can take a look at some of the best CSGO anime skins.

Are There Any Anime CS:GO Skins?

Yes, there are numerous anime CSGO skins. When it comes to CSGO skins, they come in all shapes, sizes and colors. There is something for every player to enjoy. There are also many CSGO players who are fans of anime series.

So it is only obvious that there are some anime skins in CSGO.

Unfortunately, there are no CSGO anime skins associated with any specific anime. However, there are many CSGO skins designed which have been clearly inspired by this Japanese art form.

If you are looking for anime skins, CSGO has plenty of them available, so let’s take a look at some of the best of them.

While on the topic of anime skins CSGO, we can’t help but talk about the Desert Eagle Kumicho Dragon skin. Added to the game in February 2016, this skin features multiple dragons laser-etched onto its side and grip. The Kumicho Dragon can be obtained by opening the Operation Wildfire Case. It is a part of the Wildfire Collection. The skin is available in all five exteriors. And each of them can have its own StatTrak version.

See also  Why Are CSGO Servers Down? - Simple Steps to Fix It Easily

Akihabara Accept is one of the most popular CSGO AUG anime skins. It was added to the game in May 2015 during the Operation Bloodhound update. And it is a part of the Rising Sun Collection. Akihabara Accept’s design inspired by Japanese culture. The item features a heat transfer vinyl of an anime magazine cover that depicts a female character. This weapon skin is one of the best anime skins in CSGO and is available in three exteriors, them being Battle-Scarred, Well-Worn and Field-Tested. No StatTrak or Souvenir variants of this skin are available on the Market.

The Kami skin for the Galil AR is a mil-spec rifle that was added to CSGO during the Hunt Begins update in May 2014. The Galil ar kami can be obtained from the Huntsman Weapon Case and is a part of the Huntsman Collection. The skin was painted using a Japanese manga pattern and is available in all five exteriors, and their StatTrak variants. Its value, it is one of the cheaper skins on our list.

The Bullet Queen for Glock-18 is a covert pistol that was added to Counter-Strike: Global Offensive as a part of the Cleaning Out the Cobwebs update in March 2020 and depicts a female anime character o in a pink jacket painted over a yellow and black base. The Bullet Queen skin is a part of the Prisma 2 Collection. CS:GO players can obtain it by opening the Prisma 2 Case. It is one of the best skins for Glock-18 and is available in all exteriors as well as their StatTrak counterparts.

How To Change Your CSGO Skins Into Anime Skins?

If you want to get your hands on an anime skin, there are a couple of ways to go about it. The official Steam Market is always an option. Alterntively, the third-party websites toffers CSGO skin trading services.

However, if you wish to expand your anime inventory and have a bunch of CSGO skins that you are not using and wish to get rid of, websites such as SkinsMonkey will allow you to exchange them for an anime skin of your choosing.

If you have a favorite skin that is not anime-related. Nevertheless, you wish to express your love for anime. Then your best option would be to purchase some anime stickers. And slap them on your favorite CSGO skin.

Weapon skins in CSGO have a fixed degree of wear and tear. It can’t be influenced by any action performed by the player. And it does not deteriorate past its default degradation value over time. The CSGO anime skins are no different in that regard. So the same rules apply to them.

See also  How to Kick Bots in CSGO?
Similar articles you may like